The use of computers has seeped into almost every aspect of our lives, including work, leisure, and school. Since 2014, when the 1-to-1 iPad program launched here at Friends’ Central, everybody on campus has been even more immersed in cyber-world. While lots of students use their iPads, the device that we’re required to have, many prefer laptops. One of these laptops is the Chromebook, which has the functionality needed by the FCS community, including email, word-processing, web-surfing, school-working, game-playing, and photo-editing. The cost of most Chromebooks is also much more affordable than the Macbook, the Apple laptop. Chromebook prices range from $150 – $350, while Macbooks start at $800. These are just a couple of reasons the Chromebook has gained such popularity here at school — and around the globe. 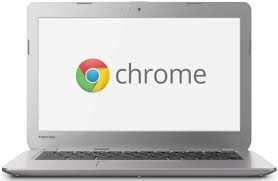 I write this article from experience, as I happen to own a 13.3 inch, blue, ASUS Chromebook. (In fact, I’m using mine right now!) I used to own a MacBook, which had a lot more advanced capabilities. However, when I switched to the Chromebook, I realized I was only using internet capabilities of the MacBook, and the additional functionality went to waste. While some, such as graphic designers and movie makers, do use the sophisticated features of the MacBook, the average MacBook user would not feel its absence, whatsoever. In addition, I am very impressed by Chromebook’s extensive battery life, roaring speakers, and yes, attractive price.

Despite all of these attractive Chromebook features, I must alert you about my negative experience with the customer service team at ASUS, the company who manufactured my Chromebook. I was originally sent a defective computer, and had to return it four times before being sent a new device. The agents were difficult to access, and there were many cumbersome phone calls and trips to Fed-Ex. So, do I discourage people from buying the Chromebook? No, just from a different company, such as Dell or Acer.

In addition to being a student council member, peer mentor, Chipotle employee, and all-around cool guy, Brian Rudolph (‘18) is a proud Chromebook owner. When describing his chromebook experience, he says, “I recommend the Chromebook for essay writing, researching, and any other sort of long term projects, because it’s easy to switch tabs and check which tasks you need to do. My favorite Chromebook feature is the keyboard. I don’t have to worry about connecting a bluetooth keyboard to my iPad and then charging both the keyboard and the iPad every night. Also, the battery life is pretty flawless.”
However, Brian makes us aware of one, minor “flaw.” “It can be hard to check your docs without wifi. It takes about 2-3 minutes to check the docs ‘saved to your computer’ and another minute to open them.” Even so, he reassures readers, with the chromebook, there are “definitely more pros than cons.”

Izzy MacFarlane (‘20) sings in the chorus, is an avid runner, and is on the student athletic committee. It’s a known fact that such a bright and busy bee needs a reliable computer, and for Izzy, that’s a white ACER Chromebook. Though she loves the device, it’s a relatively new romance. “I got my Chromebook for Christmas.” For Izzy, part of the “honey” of the device is, “My Chromebook can do virtually as much as a macbook.” However, she warns other bees to “bee” careful with their Chromebooks, as an accidental drop “stings.” “Sometimes my Chromebook crashes on me, but that might be because I have dropped it a few times.” Overall, MacFarlane recommends the laptop. “[The Chromebook is] small, can fit in my backpack, and it isn’t heavy. I love my Chromebook.”

So, to “book” a Chromebook, click here. Happy clicking!